Published by Doctor Recondite in News on May 20th, 2011

It’s the weekend again, and thank Jebus for that. Its been a long week here at Reaper Towers and as we rush about finishing off our chores, mucking out the dragon nests, bathing the Ogres and producing offerings for the Great Old Ones, we all have only one thing on our minds… LA Noire. For those of you who are fiscally challenged or just have little interest in Rockstar’s latest jewel, here are some games to consider getting your thumbs around as you settle in with that saucy wench that is your gaming platform of choice.

“Brum brum, screech, smash” That Ladies and Jellyspoons is my total knowledge of cars in a nutshell., however some of you seem to like these new fangled contraptions, even more so when they are hammering around a track at breakneck speeds, so if your one of these types Codemasters have just the thing. The third in the Dirt franchise offers double the amount of tracks that appear in Dirt 2, over fifty Rally Cars and more mud, sweat and gears than you can shake a sparkplug at. Dirt 3 is out on 24th of this month. 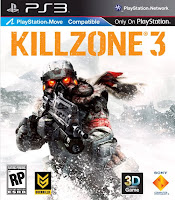 Killzone 3; PS3 at Game
£24.99/$40.70/28.63 Euro A fantastic alternative for disillusioned CoD players, battle your way through everything from alien jungles to artic tundra, get your grubby mits on a varied and diverse range of weapons and beat the living daylights out of the Helghast with a brutal melee system. 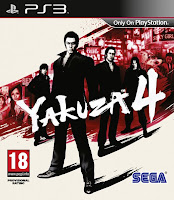 Yakuza 4; PS3 at Amazon UK
£26.75/$43.46/30.63 Euro How do you like your Japan? Personally I like it with a slab of crime and more than a dash of marshal arts, which means Yakuza 4 is perfect. An open world title, that’s a cross between GTA and Street Fighter, with enough RPG elements to keep you interested as you immerse yourself into the Japanese underworld. If this is your first foray into the Yakuza games you don’t have to worry about missing out on any of the plot from the first three releases as you get a recap at the start. As we have come to expect from releases from the Far East, there is quite a bit of dialog and cut scenes, but these only help to pull you deeper into the rich storyline. There are a couple of things that may put you off, the dialogue is in Japanese (so you’ll need your reading glasses for the subtitles) and graphically, with the exception of the cut scenes, it’s a bit weak. Your getting a hell of a lot of bang for your buck here though, with hours, if not days worth of playtime.