Published by REAPER in Reviews on January 6th, 2010 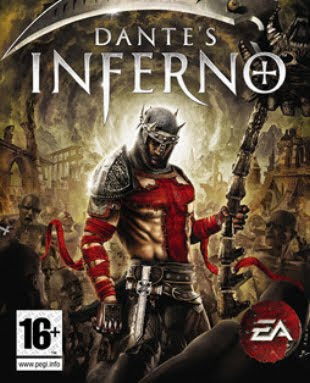 Well, the Dante’s Inferno free demo was released on the PS3 and Xbox 360 just before Christmas and is now available to all. If you haven’t got your dirty lil hands on it yet I suggest you do and see what you make of it for yourself. Our opinion’s on the demo here at Reaper Towers are quite split… Mr Exciting Alien hated it, he thought the 2D cut scenes were nothing short of amateur and the game play is repetitive and boring old hack n’ slash button bashing that gave no satisfaction… ooo harsh!! But he has a point. Although I don’t think Dante’s Inferno is quite that bad, I was very disappointed, I really thought this ticked all the boxes for a top end experience and given all the great Dev Diary’s we have seen and shared over the past months I was expecting more… As we tear the soul from this demo do keep in mind that it is just a demo and the kind of game a player will love or hate depending on a gamers taste of game type, so do the best review possible before you decide… play it for yourself! In the meantime here’s my two cents…

The environments are rich and well executed with visuals in general very pleasing. The characters and animations are also very good with a nice variety of hell spawn enemies to chop up. Unfortunately, the camera can be a pain in the ass and swings wildly at times, which is frustrating during battles. Controls are over complicated (but this can be said for most hack and slash games) which means you rely on the basic attacks for the most part and accidentally end up doing combos. Cut scene timed button bashing is here in mass, the game is overdosed with this feature and is just overdone… it is OK here and there but when its all the time it becomes repetitive and annoying. Combat is fast paced but again becomes a button masher with little in the sense of satisfying attacks, it all just feels weightless.
You have a sort of path choice to make which is cool, you can save your enemies souls as you dismember their bodies through the power of good in the form of a divine crucifix which gives you good brownie points or chop em up with Deaths scythe and this will give you nasty points, basically its like force power but without bath robes and beards. As you fill up on good and evil souls you are allowed to level up abilities, personally I thought this menu setup looked and functioned awkwardly and could potentially become annoying at later stages, but it does open up some useful powers and there is a good sense that Dante is getting more powerful with each advancement.
There seems to be a good atmosphere and story to the game which may be its strongest feature, that said it is far from perfect… A point in case is where you have a chat with ‘Death’ himself during battle and he comes across as a moany little bitch when ya start kicking his ass… it just felt… immature or silly. On the up side there is a part of the demo where you control a giant demon allowing you to bite off enemy heads and relive your Godzilla fetish for a few moment, mmm yummy! The overall experience is middle of the road with a few high points, it is not a bad game but it is no God Of War either, unfortunately! As it stands, if you love hack n’ slash games then play it through and trade it in when it gets boring, if you are not a big fan of this type of game I don’t think there is much here to change your opinion…

I think that Dante’s Inferno has the potential to be a Good game… not a Great one as originally hoped. If EA and Visceral Games start spending as much time and effort cleaning up the games shortcomings as they have spent on their hype machine then we could have a real kick ass experience here… but at the moment it is a title destined to purgatory I fear… I know its only a demo but the omens are not good, sort it out dev dudes, make Hell a nice place to be!!!