Published by REAPER in Reviews on March 1st, 2010 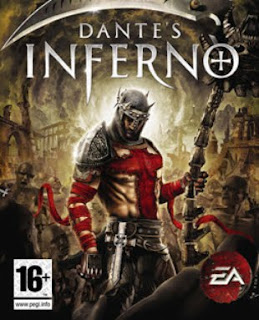 There has been a bolloc load of hype around this hack n slasher prior to release and a bit of a hate campaign after, so with all the marketing and media surrounding this title it is fair to say that the essential truth about Dante’s inferno has been lost in the mix and that is – Does it suck like a 20 stone midget on a milkshake or is it the angelic blood fest we want it to be?
After playing the demo I was not impressed and felt very let down as I really wanted to like this game. The idea of taking the works of Dante Alighieri’s Divine Comedy from the 14th century and bringing it into the twenty first century as the basis for a game – to me is absolute genius! Keep in mind that EA and Visceral games are not trying to rewrite this classic poem, it is only the premise for a great romp through Hell itself and a pretty smart marketing angle too. Hopefully other publishers will adopt this type of concept and tie it into their games as some have in the past (Bioshock – influenced by Atlas Shrugged from author Ayn Rand), it can potentially add a great deal of weight and depth if done well.
By now we all know the premise of Dante’s Inferno as far as the game is concerned… Dante is one serious bad ass doing God’s work by butchering Muslims during the Crusades. Turns out that was a crock of shit and all he has been really doing is racking up hell points for himself, Duh! Making a long story short Dante finds out that his hot blond bird ‘Beatrice’ has been killed and is promised to Hell because of his sins. Dante of course follows her into Hell with some divine help from a holy ghost by the name of ‘Virgil’. At this point you have to start a journey through the nine circles of the underworld and the fun begins! 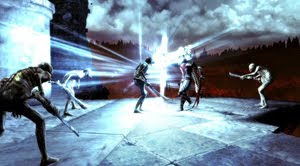 So let’s get on the highway to hell and see just how hot this game is or is not. First off, the game looks great. Visuals are rich and colourful giving a good fell of being in various areas of Hell. Attention to detail is very strong and there always seems to be something going on in the background. Levels like ‘Gluttony’ are suitably gooey, snotty and gross while the likes of ‘Lust’ are suitably raunchy in a sick way… it’s all sexy dangly bits everywhere, more old age pensioner than playboy mansion though. Each of the areas through hell are suitably customised and well designed in relation to their theme while the moaning and groaning of lost souls echoes through the background screams. The atmosphere is well executed in sight and sound and at times is almost a bit pee you’re your pants freaky. Animations and models are also of a high standard, the whole 60fps trick that Visceral Games have used seems to have worked well. There is a reasonable variety of enemies to bash and the list grows as you go through each circle of Hell but quite often you will face the same demon drones, with the special level types popping in for a kicking every now and then. Combat is pretty basic… You have Deaths scythe and the holy crucifix to combat enemies, the scythe extracts evil points in the form of souls and the cross good points. These souls unlock skills which come in the form of extra health, stronger attacks, and combo moves. You will also meet dammed famous figures of history and myths that require your judgement, condemn or absolve, the choice is yours, but these decisions will influence your dark or light power points. Collectibles come in the form of Relics and Judas coins, these also add to your pool of souls while the relics can be equipped and upgraded giving an array of benefits. All of this will help you get access to evil abilities or good ones, you can spread them out over both disciplines, but it really has little impact on the overall game as to which side you invest in. Executing new moves is as easy as pulling the legs of a beellez-bug and requires little in the way of complex brain to finger function. You can mix it up by trying out the various options of combos but you really don’t need to, basic chopping or shooting crucifixes will do the trick with the odd need to shield or dodge. You could say this is too basic and simple or you could look at it that it doest get in the way of fluid progression. Either way slicing off demon heads or hacking at a bunch of evil babies is still a fun experience. This can become a bit repetitive but it never really gets boring and if you do decide to try and learn the combos then it will keep it even fresher. In Hell size matters, bosses are massive and impressive to look at but lack little in the way of a punch for the most part. Beating the hell spawn upper elite is pretty easy and usually involves a basic ‘rinse and repeat’ method, but again it is enjoyable rather that annoying. You will even have some objectives that involve controlling giant demons like a vehicle and these, although a bit token, are enjoyable and change the pace giving a break from the button bashing. Eventually you will confront the devil himself, who is actually quite a cool dude despite his need to show off the twig and giggleberries on a regular basis, well it is hot down there I guess. Then there’s the sexy Beatrice who is almost always naked, being fondled by bad men and giving Dante a constant guilt trip… ungrateful cow! Minos will try and crush ya, Cleopatra will try and screw ya, Mark Anthony will try and poke ya, Gluttons will try and eat ya, and the rest will just try and kill ya in colourful ways. It’s fair to say that Dante is having a pretty shit day! The holy freak Virgil will guide you on your way through all this giving his down beat advice and generally being a misery. Thanks for nothing ya ectoplasmic freak in a dress! 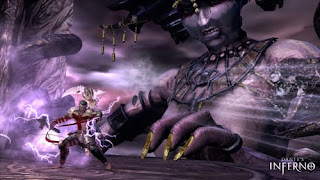 Overall it’s fair to say that Dante’s Inferno is nice on the eyes and enjoyable to play while simple to get through even on the top difficulty setting but what makes this stand out from the crowd just that little bit is its story and theme. The game is a bit short and easy to rip through and holds little in the way of a challenge but it does this wrapped up in beautiful visuals and fluid fun button bashing that has a story compelling enough for you to want to know what comes next. The in-between cut scenes are top quality and really enrich the atmosphere of it all. That said it feels like there could have been more added to the game, especially in terms of game length and enemy variety but perhaps I’m just being greedy… It does have a flavour that many of the early PS2 ‘hack n’ slash’ games did and feels quite nostalgic, at least to old fogies like me. And yes, this is basically God of War but that’s not such a bad thing especially for PC and Xbox owners.

If you like button bashers, demons, game nudity, buckets of bloody gore, biblical overtones and hero saves the day kinda stuff then you will thoroughly enjoy this romp through Hell, it’s just good old fun with lots of boobies, some bigger than a truck… honest! If you’re looking for innovate, high brow style game play, then leave Dante in Hell. What you really want to know is should you Buy, Rent, or Pass? Well there is some DLC coming for this soon so that will add multiplayer, that could influence your decision but if ya couldn’t give a demon’s dick about such things then renting is probably a good idea. Chances are you will play through this once, maybe twice but then it’s gonna become a dust collector or trade in for most people. I really enjoyed Dante’s Inferno so if that’s a sin then send me to Hell, I have to say I am looking forward to the sequels which I imagine will be ‘Dante’s Purgatory’ then ‘Dante’s Paradise’, this would complete the Divine Comedy (Look it up you lazy people) but of course with a Visceral Games twist added. That said one man’s Heaven is another man’s Hell… I really enjoyed this but it’s really a matter of taste, if ya don’t like it spit it out but it’s worth chewing!